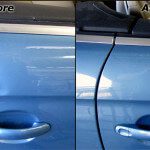 Paintless dent repair, or PDR, can remove dents when the finish of the car is not harmed or broken

Paintless Dent Repair, or PDR, is an auto body industry recognized dent removal process. It involves the removal of hail dents and other types of damage on exterior surface panels without disturbing a vehicle’s finish.

In the majority of cases, the paintless dent repair procedure involves using specialized tools for applying pressure to the backsides of panels to remove surface indentations.

A second paintless dent repair technique involves bonding a “tab” or another device to the exterior of a panel. When the “tab” is affixed, the dent is then pulled out from the outside of the panel.

Both of these techniques are referred to as paintless dent repair because the technician restores the panel appearance, eliminating the need for the panel’s surface to be refinished. 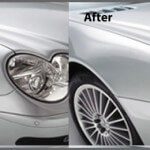 When Paintless Dent Repair Is Used

The real value of the paintless dent repair process is it eliminates the need for refinishing if the outer finish of the panel, such as the clear coat and paint, has not been harmed. Not only is it a quicker repair, it is also much less expensive. This is why it is a great technique to be used in repairing multiple small dents as with hail damage.

A key for using the primary paintless dent repair technique is a technician should be able to gain access to the backside of a dent. On occasion, to be able to offer paintless dent repair, a technician will drill holes for access. When complete with the dent removal process, the holes are treated with a rust inhibitor and filled with a plug to guard against moisture entering the inside of panels on which work was performed.

PDR services are offered by Auto Color of Madison and Middleton. Our professionally trained 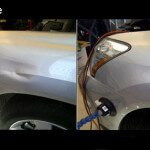 Depending on the area needing PDR, the repair can be pushed out from the back side or pulled out with suction from the front

technicians have the technical training and professional support to effectively perform all types of dent removal projects in Madison WI.

For assistance with your dent removal, contact the Auto Color paintless dent repair pro at either of our two locations in the Madison WI area – on Parmenter Road in Middleton or the southwest corner of the Stoughton Road and Buckeye Road intersection.

Call Auto Color at 608-831-9554 or email us for help with your auto body needs or paintless dent repair in Madison WI. 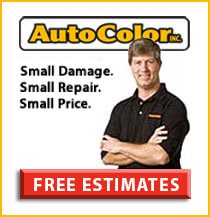